I know that I’ve been a bit quiet on my photo blog lately. It’s not that I didn’t have anything to talk about… actually, it was quite the opposite. I was pretty busy with several 10 hour, 12 hour and 16 hour work days. It was all work, eat, sleep.

One of the recent photo assignments involved some time with President George W. Bush and Major League Baseball great Tony La Russa. Both photo sessions were only a brief part of my busy days, but they were very enjoyable! Both subjects surprised me with how pleasant, sincere and down-to-earth they were.
Part of the event involved them meeting various VIP’s and posing for a photograph with them. Both men seemed happy to be there and gave everyone a welcoming handshake. They also gave a speech and Q&A, and each time it was a message of sticking to your values and beliefs and being humble. It was nice to see two such famous people be so kind and caring. Here are a couple photo out takes from my time with them… 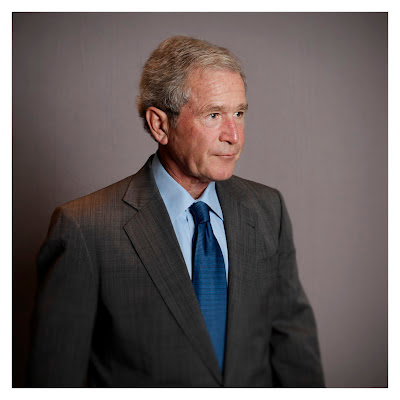 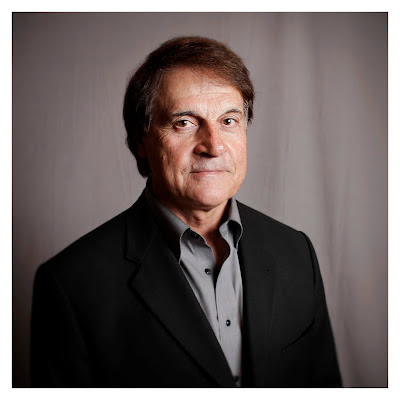 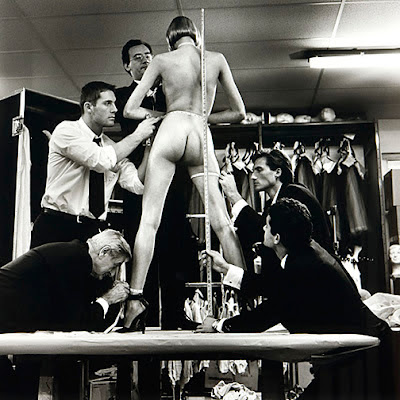 photo by Helmut Newton ©, taken from www.lalettredelaphotographie.com
I don’t shoot on the same plane of existence that Helmut Newton shot, and I never will. It takes a certain something that only comes along once in a million years to capture women, fashion, sexuality, privilege and angst the way Helmut captured it. In other words, we’ll probably never see another photographer record life the way he did. His work is so identifiable and so unique in its expression.
Countless art and fashion photographers try to copy him, but he can’t be copied. Check out some of Helmut Newton’s work, along with an interview, here:
www.lalettredelaphotographie.com
www.lalettredelaphotographie.com/entries/6026/newton-100-masterpieces-part-4
www.lalettredelaphotographie.com/entries/6042/newton-100-masterpieces-part-8
www.lalettredelaphotographie.com/entries/6008/helmut-newton-the-1975-interview
One of the main things you’ll shoot during a convention is what’s taking place on the floor. There are dozens of things to focus on, but one key subject is tight interaction between the different booths and the convention attendees. Look for people discussing products, testing samples, giving talks and listening to details.
These won’t be wide shots. You want to come in tight enough that the people interacting become a clear focal point. You still need a little background information to help “set” the shot, but it shouldn’t compete for attention with the people.
At some point, you’ll still need to get those wide shots that show an entire aisle or several booths in a row. You’ll still need some product shots, signs, banners and sponsor shots. You’ll still need to shoot VIP’s, grip and grins, etc… all those photos will be discussed another day. For this post, let’s just look at samples of the “interaction” shot. 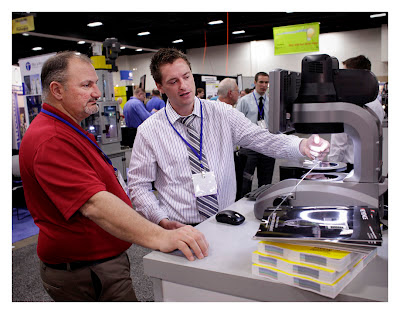 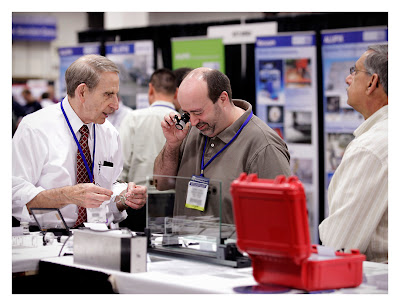 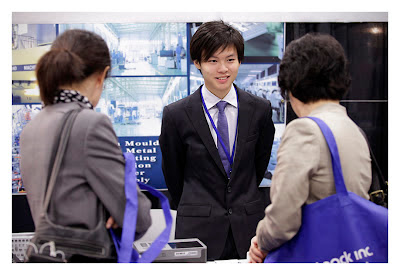 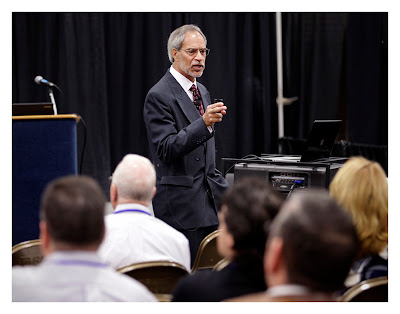 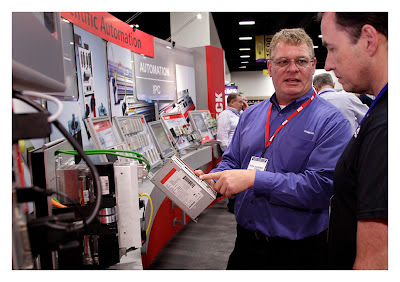 *** UPDATE ***
I received payment for the use of this image, which goes to show that Perry’s staff is willing to correct their mistake. Good on them! I’m glad to see them wanting to fix things without much fuss. Who said all politicians were corrupt? And, now the original post…
I posted a nice little image of Rick Perry last year. You can see it here:
http://janikphotography.blogspot.com/2010/09/photographing-governor-perry.html
The image is available through Splash News, a photo wire service or syndicator. If you want to use it, that’s the only place you can get copyright permission, except for directly through me. Today, I saw this on Rick Perry’s official facebook page: 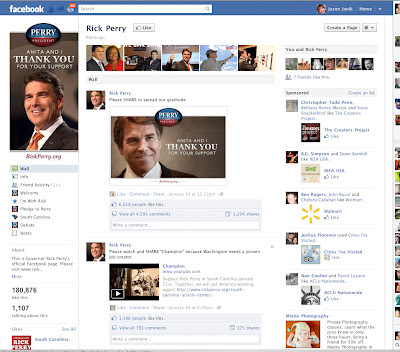 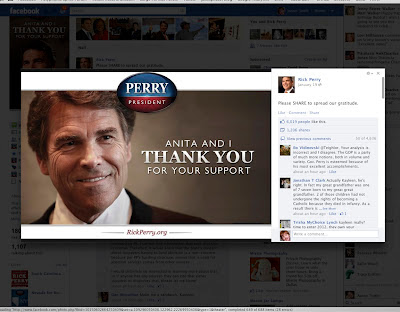 I’m waiting to hear back from my editors at Splash, just to make sure a sale of this image didn’t go through… maybe it slipped through the cracks or hasn’t been added to the sales log yet? However, the sales tracking system doesn’t currently show anything, so I am currently under the impression that Perry’s people did not legally obtain this image.
If Splash doesn’t show it’s been sold, and I know that I have never been contacted directly about it, this could be a problem. A simple cease and desist letter won’t cut it, as the image has already been picked up by other websites and is being used all over the web with no clue that it was my work. Here is one lampooning the governor: 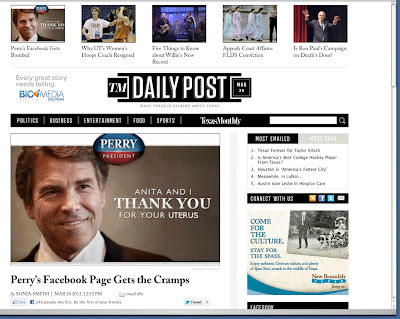 Hopefully, this issue can be resolved. I’d hate to find out the head of our state would let someone’s copyright be trampled upon. Hopefully, he recognizes the importance of protecting our rights to work and benefit from that work, without it being stolen from us. Hopefully, a phone call or letter and an invoice will be all that’s needed to clear this up.
Of course, copyright infringement happens all the time, and this should be relatively easy to clear up. I don’t hold anything against the governor personally. I’m guessing it was one of his PR people that used the image without permission.

Read about it here:

I recently travelled to Lubbock, TX and its surrounding cities to shoot some video and stills for an interesting story on water conversation in the Texas Panhandle. The story ran in the Texas edition of the New York Times today, along with more photos and video on the Texas Tribune Website and on Youtube. 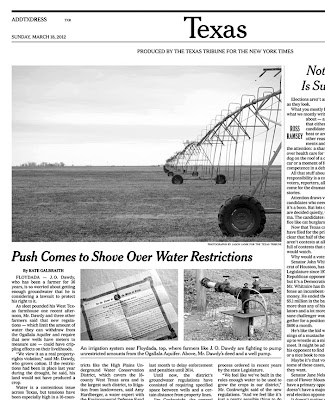 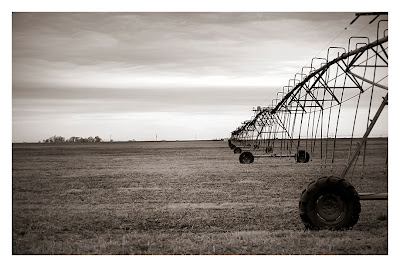 My week has been pretty crazy. The picture above will show you where I spent Thursday. Do you recognize the flat, windy landscape of Lubbock, TX in the photograph? My assistant and I left Dallas at 3:30am on Thursday and arrived in Lubbock six hours later… just in time to enjoy a nasty cold front that brought 50 mph winds, sleet, rain and snow with it! We spent the day doing photos and video for a NY Times feature that I’ll link here when it comes out in a week or two. We finally got back to Dallas at 11pm that night. It was basically twelve hours of driving and seven or eight hours of shooting. It was a looooong day!

But, the long Thursday work day wasn’t the beginning (and won’t be the end) of my week. I started out with a Monday night shoot at Trees in Deep Ellum for a client of mine. They were throwing a big party with a celebrity tattoo artist and musician. It was a blast, but it also meant staying out pretty late. There was a photo booth at the event that I couldn’t resist using. I got home, slept four hours and then started my Tuesday… 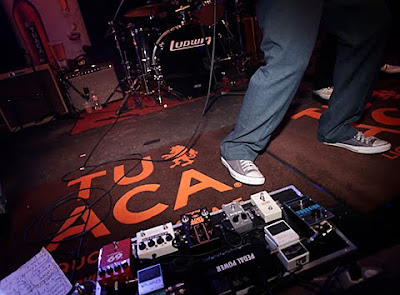 Tuesday? Yup, after spending the morning and afternoon dealing with Photoshop, I hopped in the Suburban and headed three and a half hours south to Austin, TX. It was night two of shooting music, drinks, tattoos and fun for my client. The Austin party was much more rowdy, in a good way! But, it was midnight by the time I was ready to head home, and I was tired. I made it all the way to the Carl’s Corner truck stop, then slept for a few hours next to all the parked big rigs, and finally finished the last hour or so of driving.
I spent most of Wednesday doing more Photoshop work, and then it was time to get a few hours sleep before heading to Lubbock! Luckily, I had Friday as a slow day… some Photoshop work and video files to go through. However, it’s giving me a chance to catch a breath before shooting all day on Saturday. So, what did you do this week?
Bank of America must’ve spent a lot of money to take out a full-page color advertisement in the Sunday paper. Those things aren’t cheap! However, they can still attract a lot of attention. There’s a big pay-off, if the customers take notice. So, why put out an ad that looks like it belongs in the back of the local penny saver?
Look at a copy of the ad below. Now tell me, doesn’t that photo look terrible?!? Did my grandmother take it back in 1987, right before she had her cataract surgery? The basic gray (or grey, if you are British) background would normally be complementary, but it seems to make this particular image look even worse! Don’t get me wrong, I understand the idea of making a photo look more like a “snapshot” than a slick, fancy, high-dollar production piece. The “it looks like something from my Facebook wall” aesthetic is in vogue with large corporations and their advertising agencies right now. They want to appear to be your buddy, so their advertising imagery is trying to emulate what you would normally see from your friends and family – not some $10k photo shoot with models, assistants, make-up artists and a fancy craft services table.
I was hired last year by one of the largest retailers in the world to take feature story and cover photo images for their monthly employee magazine. This publication has a circulation bigger than most major city newspapers! I was constantly being reminded by the art director and communications director that “these images need to feel like the average employee took them”, but still feel professional and clean. It was a balance to make the images pop and grab the viewer, but still connect with the average person… not make them feel like they were being talked down to.
So, what’s wrong with this BoA advert? It skewed way too far on the snapshot side of things and forgot about the fact that it still needs to grab the reader’s attention (at least in a positive way). Harsh light, squinting eyes, tons of distracting background items… it just fails on so many levels. On a positive note, I like how the ad is tailored to the North Texas market. It says a lot that BoA found a local success story to champion.
Spring is just around the corner, and the flowers and bees are ready for action! I love sitting outside and following a bee from flower to flower. Sure, the images are totally different from my concert and music photography. These pics are a world away from the portraits I do of CEO’s celebrities and other notable figures. However, I think this macro photography might just be the most relaxing of anything I’ve ever shot. 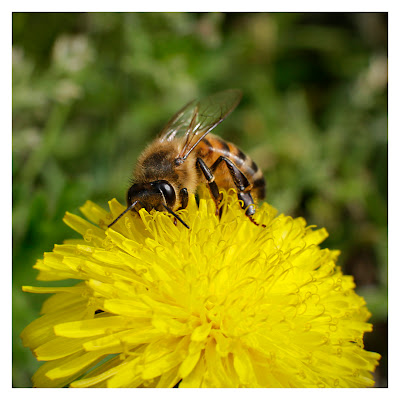 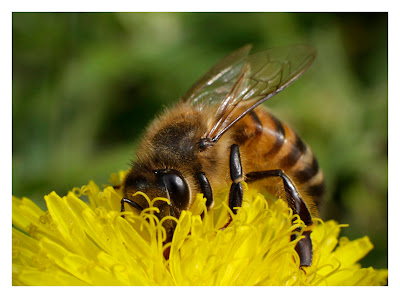 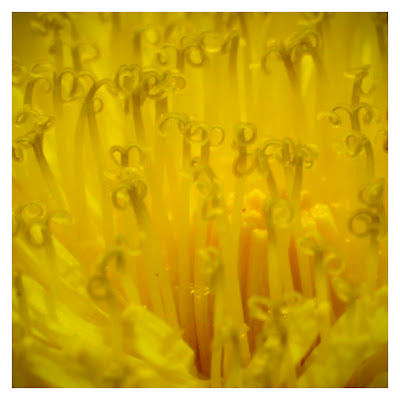 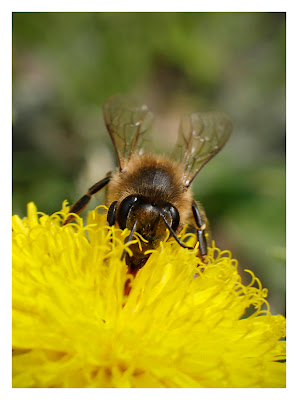 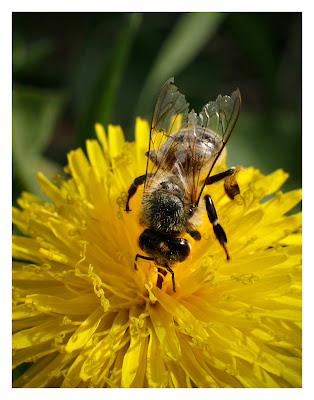 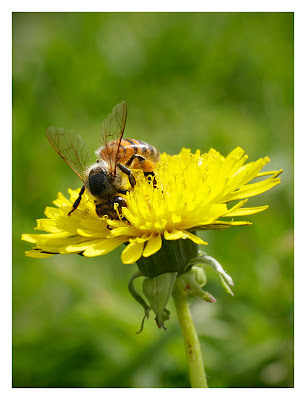 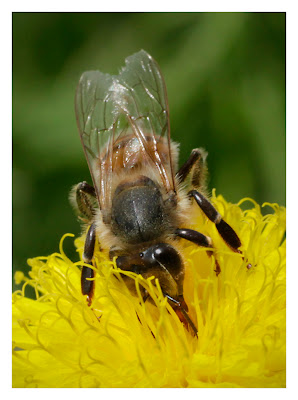 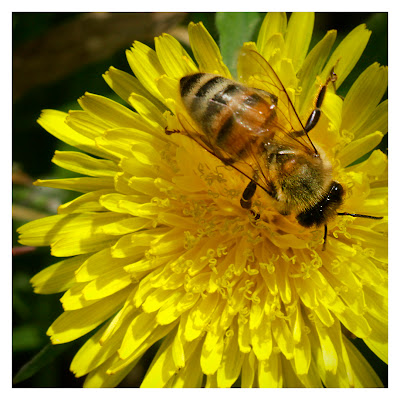 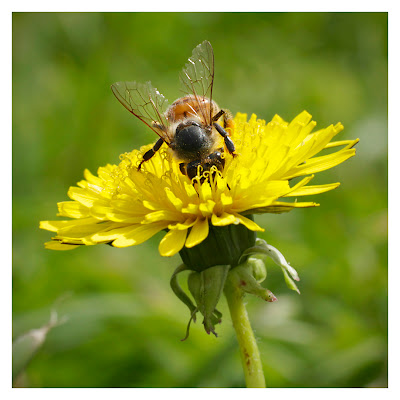 To see my other photos, please visit my website at www.janikphoto.com
Follow the link below to read more about Canon’s newest flash, the 600EX-RT Speedlite:
www.bhphotovideo.com/indepth/canon/announcements/new-canon-600ex
As you can see by the screen grab below, it looks much like Canon’s other flash units, but the specs definitely suggest it’s an improvement over previous models… 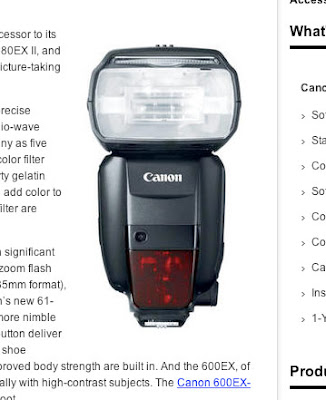