Skip to content
OK, one of my batteries on the Profoto AcuteB 600r packs finally died on me. It should be no surprise, as I’ve been foreshadowing this day in previous blog posts for a while now. I’ve had the kits for over three years, so they beat the odds (the batteries are estimated to last two years with regular use).
It was working OK the other day, but the yellow light would come on almost immediately after I started shooting. I knew it was on its last legs. The next day I took a pack with me for a new photo project I was trying out, and the thing just gave a pathetic whimper and wouldn’t even turn on. It reminded me of a car with a bad battery that won’t start. I tested the pack with another battery when I got back to the studio, just to trouble shoot things (and make sure it really was a bad battery and not a bad pack). Yup, the pack worked fine with a different battery, so I found my culprit!
There are a few options for replacement. One might be the new Lithium battery pack, but that is more than $600, and I am assuming that it requires a new, dedicated charger. Another option is to purchase a new Lead Acid battery cassette made by Profoto, selling most places for around $275. I went with option three (ordering a similar spec non-Profoto battery) for $20 each… we’ll see how well it works when the new batteries arrive.
The batteries that I ordered show to be the same dimension as the Profoto battery. They have the same voltage and a slightly higher amperage. I am guessing they will get the job done just fine. As you can see below, removing the old battery was a snap. It’s really just four screws and two connectors. I’m guessing that installation of the new batteries will be just as easy. These are the three main pieces to the battery cassette (not shown are the four screws): 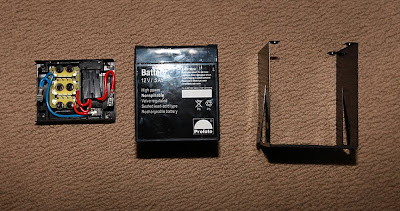 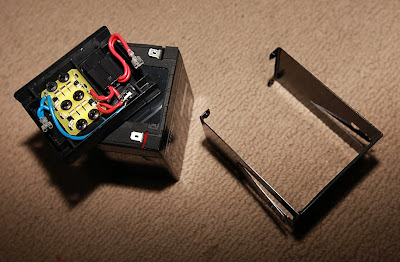 So, we’ll soon find out if I have found a good $20 per pack battery replacement for my Profoto AcuteB 600r packs. Let’s keep our fingers crossed.