Of course, I’m not so rich that I can just buy this for the heck of it, and 99.995% of my clients don’t need a file that big. It would just be overkill for all my newspaper clients and most of my magazine clients. But, how I would soooo love to pull my Hasselblad gear out of storage and start clicking away again. Maybe I’ll score another big $50k shoot that will allow me to pay for this? Think it will happen in the current economy?!? I’ll keep my fingers crossed, but I won’t be holding my breath.

In case you didn’t know, I’ve been posting a daily State Fair of Texas photo over on the Quick website. If you love the fair as much as I do, you should be checking their blog daily at noon! Here’s a link to a couple of the recent picture posts:

blog.quickdfw.com/archives/2010/09/state-fair-of-texas-photo-a-da-2.html
blog.quickdfw.com/archives/2010/09/state-fair-of-texas-photo-a-da-3.html
I will post one for each day of the Texas State Fair, so keep coming back y’all!
Sometimes the audience can be even more entertaining than the band playing on stage. Take the recent Slayer and Megadeth concert, for example. I had some really great pictures of the bands performing, but I couldn’t resist getting a few images of the audience getting rowdy. People were being pummeled in the mosh pit and getting hit by crowd surfers. This shot of mine ran in the Dallas Morning News and proves that audience pics can be just as fun to shoot… 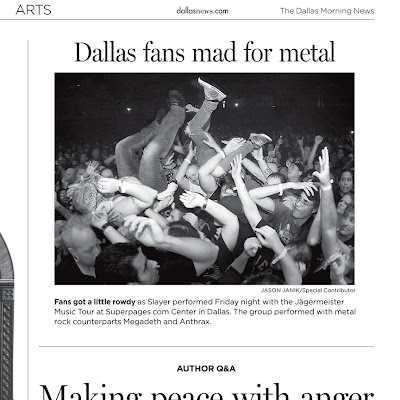 I wind up shooting in night clubs all the time – capturing the energy, the lights, the color, the movement… making a still photo look and feel like the real thing. This is where I go when I try to capture Dallas on film at 1am. This is what I see. This is what I do…
I was able to finally scan the negative and print the flower image I made a week or two ago using some old Polaroid Type 55 film I had. If you aren’t up to speed on what I’m talking about, read here: janikphotography.blogspot.com/2010/09/polaroid-type-55-lives-forever.html
I think the image turned out pretty well. I wish I had more than just one box left, as I could see doing a lot more with this stuff. 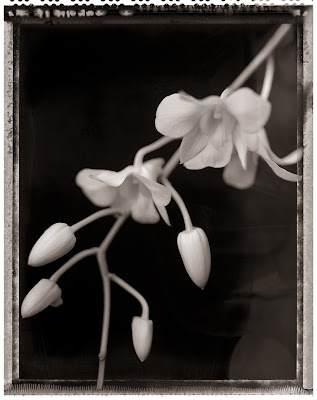 The ASMP Dallas chapter’s gallery show that I put together (with plenty of help from the other board members) seemed to be a big hit last weekend. The show is still hanging at Kettle Art Gallery tonight and tomorrow night, if you want to check it out for yourself. In the meantime, here’s a little video of the opening reception…

I hope you saw today’s issue of the Dallas Morning News. Besides some pretty good stories and features in the other sections, you would’ve had the chance to read Mario’s review of the Tom Petty and ZZ Top concert at Superpages.com Center… Starplex, as most of us still call it, decades later.
Of course, the main reason to read the Tom Petty review is to see my pics of the show. I was actually asked to shoot both acts, but only Petty made the paper. Too bad, because I had some real nice ZZ Top stuff. Maybe I’ll share it here on the blog later. Anyway, be sure to pick up the paper this weekend, too. It looks like I’m shooting Slayer and Megadeth, which should run in the Sunday edition! 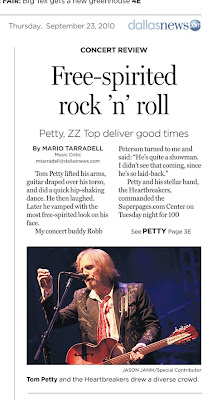 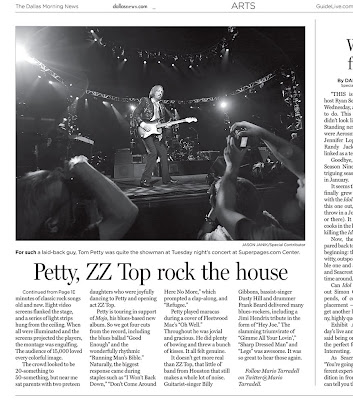 It was an interesting day today. It started with a photo session in Dallas with actress Diane Lane, to promote her upcoming film, Secretariat. I can’t share those photos, yet. They have to stay under wraps until the movie premiers. However, I can share a photo from my evening shoot…
I had the chance to photograph Texas state governor Rick Perry tonight. Whether you love him or hate him, I learned something tonight. The man is very persuasive in his discussions and speeches! Unlike my earlier shoot, where I pulled out my Profoto strobe gear and light modifiers to shoot Diane Lane, I had little choice but to use natural light for this quick shot of the governor. I think it works well, though… 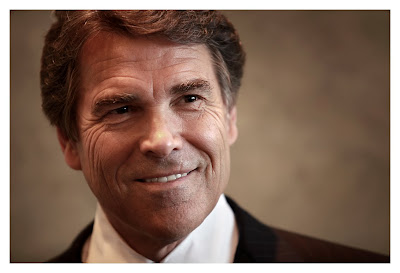 It has been pretty busy, well… very busy over the last week. That’s why I’ve been slacking on my blog. I’ve been busy shooting The Blue Man Group, a CEO for a trade magazine, a Halloween feature story shoot, some night spots, marketing/PR stuff for the museum, some doctors for an advertisement, Tom Petty and ZZ Top! And tomorrow morning I will be doing a portrait of actress Diane Lane and shooting a fundraising event for governor Rick Perry. Let’s not even talk about this weekend’s shooting schedule?!?!? It’s just as packed!
Oh, one thing I was able to squeeze in was some testing with the ring flash. I had a model scheduled, but she had a last-minute casting call for some reality show come up, so I had my sister substitute. It wasn’t a problem, since my main goal was to keep in practice with my Profoto ring flash… I liked the locations I used enough that I’m eager to go back out and shoot them again with a professional model – one that won’t have to cancel next time! 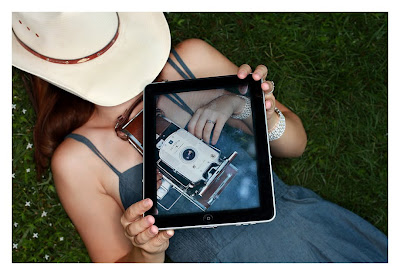 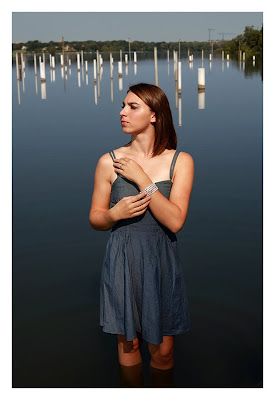 I used to shoot concerts ALL the time. For the last ten to fifteen years, it would probably average out to be a couple, maybe a few, every single week. I saw a LOT of shows! Of course, I eventually started doing more editorial features and lifestyle photography. I started getting magazine cover shoots and corporate work. I shot more band promo material and album covers. It all takes away from the amount of time you can focus on live shows. In the last couple years, I probably only shot a couple shows a month.
This last month feels like the good old days again. I’ve shot plenty of concerts and have another live show lined up for tomorrow night. Sure, covering a concert for a newspaper doesn’t pay as well as a magazine feature, and it definitely doesn’t compare to some of the corporate and commercial work I’ve done. However, it just feels good to be back in the photo pit with fans screaming behind me and rock stars jamming in front of me.
Here are some clippings/tear sheets from the last week or two, showing some of the concerts I’ve enjoyed shooting – including Green Day, Jonas Brothers, Creed and Anthony Hamilton. Of course, if you subscribe to the wonderful Dallas Morning News, you’ve probably already seen them… 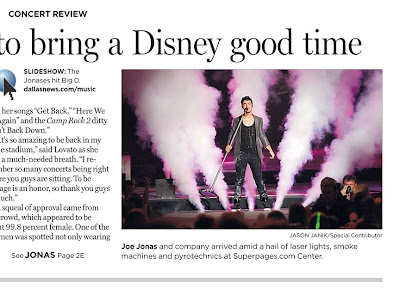 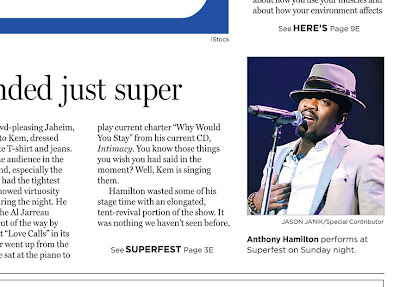 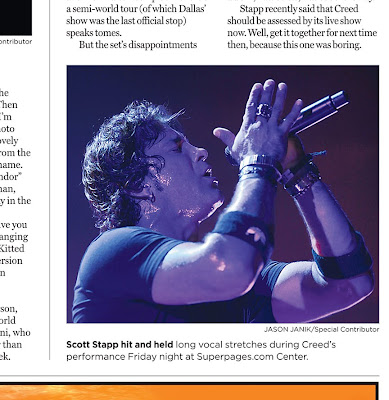 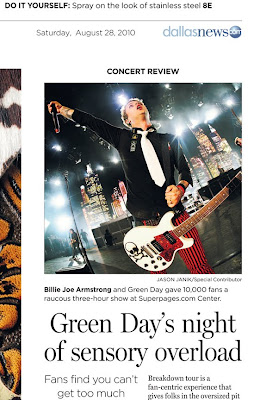 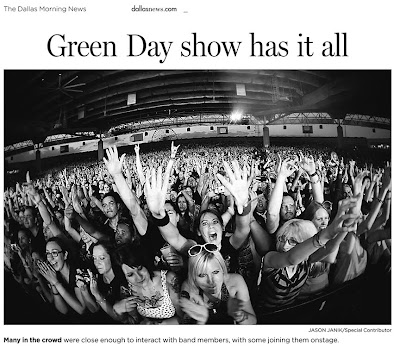 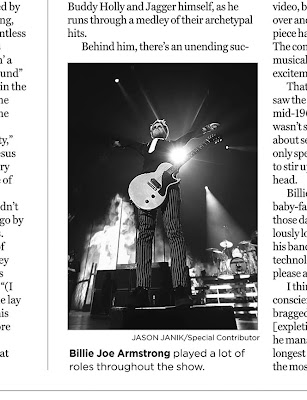